Nestled between a historic stone estate and a corporate office park, the Ashlawn barn is a modest Pennsylvania bank barn that has undergone numerous lives since its agricultural origin. The design for a new, collaborative office environment begins with removing half-a-century’s worth of modifications to expose the stone and timber structural bones of the building. The street level facade faces a residential neighborhood with a relatively intact historic appearance, while the rear facade has been significantly changed through the years. The design interventions respect the historic character of the street facade while replacing later material substitutions on the rear elevation with a timber curtainwall with electrochromic glazing to manage interior solar gain and glare in the brightly daylit interior.

The project is pursuing Living Building Challenge Petal certification with a focus on material toxicity and embodied carbon. 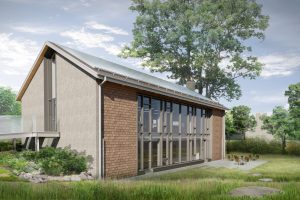 The south face of the building features roof-integrated solar panels and a timber curtain wall with electrochromic glass. 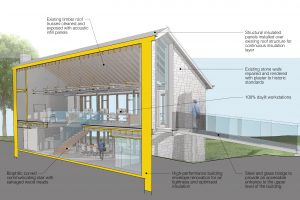 Although an existing building structure, the project renovates the building enclosure for air tightness and optimized insulation. 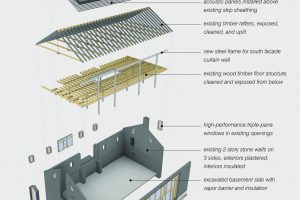 The project is a surgical renovation of the existing building to celebrate the existing structure and infill with high-performance assemblies. 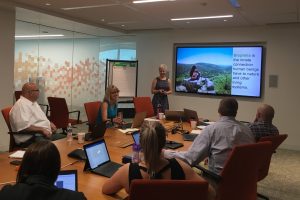 The project team participated in a day-long Biophilic Design Workshop. 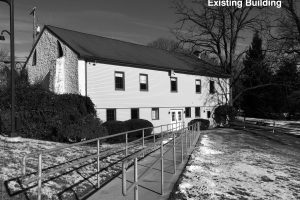 The existing building is a centuries-old stone Pennsylvania bank barn which has fallen in to disrepair.
BACK TO ALL PROJECTS
Scroll to Top