With an eye for the creative re-use of industrial sites, developer/builder Gorski Engineering set their sight on the sprawling 65,000 sf former home of the Best Made Silk Hosiery Company in the heart of a historic borough. Re:Vision worked closely with Gorski to conceptualize a redevelopment plan for the new “Best Made Center” which selectively strips away a century’s worth of industrial additions to create a campus arrangement of buildings and outdoor spaces. The central design challenge for the 23,000 sf anchor tenant Synergis Technologies was to bring together two divisions of the company (software programming and sales/training) that have evolved in separate buildings to have distinct cultures and priorities for collaboration and privacy.

Historic brick salvaged for use in courtyard paving

Energy efficient lighting and HVAC woven through the historic structure

Operational Carbon (the carbon associated with the energy a building uses to run) is only half of the overall carbon equation – Embodied Carbon (the carbon associated with the construction of the building) is the other half. One of the most effective ways to reduce Embodied Carbon is through building reuse, commonly referred to as “Adaptive Reuse.” An existing building’s structure and enclosure can represent 50-75% of the overall embodied carbon investment so reuse gets you ahead of the carbon game right out of the starting blocks!

The Best Made Center was originally a silk hosiery factory constructed of steel, concrete, brick, and wood. The building superstructure and exterior walls were left in place, structurally reinforced, and then refinished inside and out to create a new building out of the old shell! 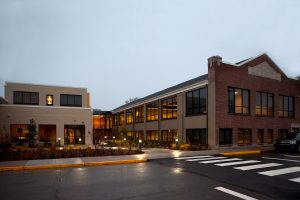 The building is an adaptive-reuse of a century old masonry factory building and multiple generations of manufacturing building additions. One of the early design moves was to demolish a generic infilled facade between the two historic facades creating an new courtyard. 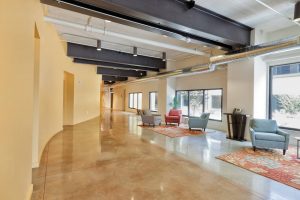 The entrance lobby exposes the existing steel beams and adds a new concrete floor that is referential to the original factory floor. 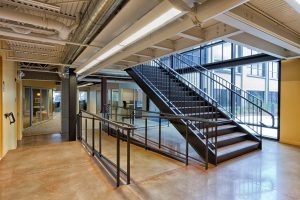 The different factory additions were all set at different levels necessitating a connector addition to mitigate the changes in an accessible and elegant way. 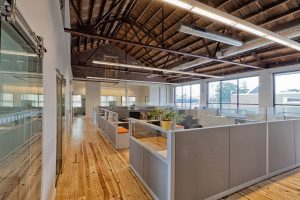 The upper level of the original building was opened up to the greatest extent possible to expose beautiful steel trusses formerly hidden behind multiple layers of ceilings.

The cafe, on the lower level of the original building, utilized salvaged wood for flooring and custom built booths. 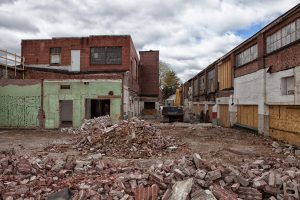 Demolition of the infilled additions revealed the skeletons of buildings within.

The historic factory can be seen on the right - but it had been severely compromised over generations of owners. 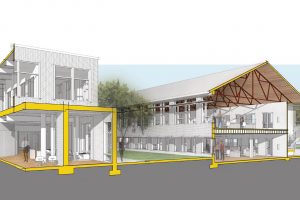 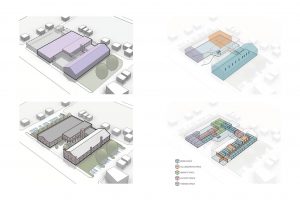 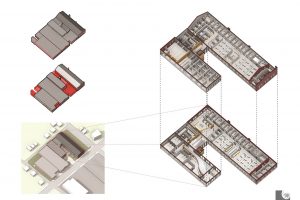 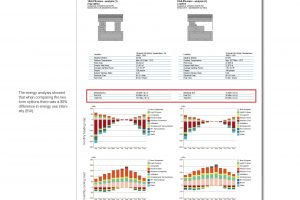 BACK TO ALL PROJECTS
Scroll to Top